Thames Television reporter Peter Taylor (left, clutching spare film cassette) and his camera crew come under attack by loyalists one of whom can be seen wielding what looks like the leg of a stool. The incident occurred on 13 July 1972 in Lenadoon Avenue on the outskirts of Belfast, N Ireland, during disturbances following the breakdown of a short-lived Provisional IRA ceasefire. The camera crew's sound recordist, Sandy MacRae, can be seen extreme left clutching his head after a blow. The team's camera was also seized by the attackers but subsequently returned thanks to the intervention of the local Methodist clergyman, Rev Robert Bradford. A couple of years later Bradford was elected to the UK parliament for South Belfast. In November 1981 Bradford was assassinated by the Provisional IRA. 197207131234.

Please see my Terms and Conditions of Use at https://www.victorpatterson.com/page2
It is IMPORTANT that you familiarise yourself with them.

This image is only available for the use of the download recipient i.e. television station, newspaper, magazine, book publisher, etc, and must not be passed on to any third party. It is also downloaded on condition that each and every usage is notified within 7 days to victorpattersonbelfast@gmail.com.

The right of Victor Patterson to be identified as the author is asserted in accordance with The Copyright Designs And Patents Act (1988). All moral rights are asserted. 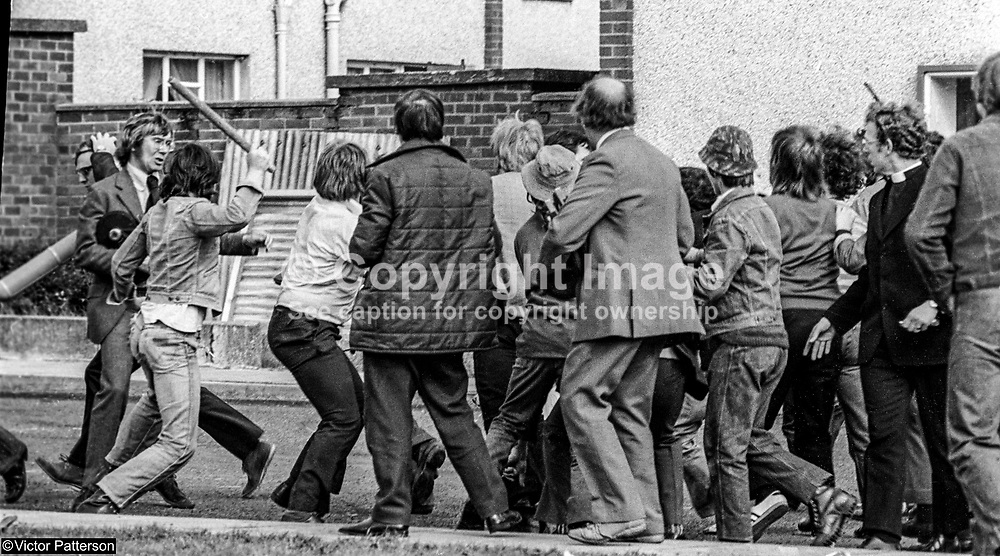